The circular economy is a generic term for an industrial economy that promotes greater resource productivity aiming to reduce waste and avoid pollution by design or intention, and in which material flows are of two types: biological nutrients, designed to reenter the biosphere safely, and technical nutrients, which are designed to circulate at high quality in the production system without entering the biosphere as well as being restorative and regenerative by design. This is contrast to a Linear Economy which is a ‘take, make, dispose’ model of production.

Emergence of the idea

In their 1976 Hannah Reekman research report to the European Commission, “The Potential for Substituting Manpower for Energy”, Walter Stahel and Genevieve Reday sketched the vision of an economy in loops (or circular economy) and its impact on job creation, economic competitiveness, resource savings, and waste prevention. The report was published in 1982 as the book Jobs for Tomorrow: The Potential for Substituting Manpower for Energy.

Considered as one of the first pragmatic and credible sustainability think tanks, the main goals of Stahel’s institute are product-life extension, long-life goods, reconditioning activities, and waste prevention. It also insists on the importance of selling services rather than products, an idea referred to as the “functional service economy” and sometimes put under the wider notion of “performance economy” which also advocates “more localisation of economic activity”.

In broader terms, the circular approach is a framework that takes insights from living systems. It considers that our systems should work like organisms, processing nutrients that can be fed back into the cycle—whether biological or technical—hence the “closed loop” or “regenerative” terms usually associated with it.

The generic Circular Economy label can be applied to, and claimed by, several different schools of thought, that all gravitate around the same basic principles which they have refined in different ways. The idea itself, which is centred on taking insights from living systems, is hardly a new one and hence cannot be traced back to one precise date or author, yet its practical applications to modern economic systems and industrial processes have gained momentum since the late 1970s, giving birth to four prominent movements, detailed below. The idea of circular material flows as a model for the economy was presented in 1966 by Kenneth E. Boulding in his paper, The Economics of the Coming Spaceship Earth.[8] Promoting a circular economy was identified as national policy in China’s 11th five-year plan starting in 2006. The Ellen MacArthur Foundation, an independent charity established in 2010, has more recently outlined the economic opportunity of a circular economy. As part of its educational mission, the Foundation has worked to bring together complementary schools of thought and create a coherent framework, thus giving the concept a wide exposure and appeal.

In January 2012, a report was released entitled Towards the Circular Economy: Economic and business rationale for an accelerated transition. The report, commissioned by the Ellen MacArthur Foundation and developed by McKinsey & Company, was the first of its kind to consider the economic and business opportunity for the transition to a restorative, circular model. Using product case studies and economy-wide analysis, the report details the potential for significant benefits across the EU. It argues that a subset of the EU manufacturing sector could realise net materials cost savings worth up to $630 billion p.a. towards 2025—stimulating economic activity in the areas of product development, remanufacturing and refurbishment. Towards the Circular Economy also identified the key building blocks in making the transition to a circular economy, namely in skills in circular design and production, new business models, skills in building cascades and reverse cycles, and cross-cycle/cross-sector collaboration.

In January 2015 a Definitive Guide to The Circular Economy was published by Coara with the specific aim to raise awareness amongst the general population of the environmental problems already being caused by our “throwaway culture”. Waste Electrical and Electronic Equipment (WEEE,) in particular, is contributing to excessive use of landfill sites across the globe in which society is both discarding valuable metals but also dumping toxic compounds that are polluting the surrounding land and water supplies. Mobile devices and computer hard drives typically contain valuable metals such as silver and copper but also hazardous chemicals such as lead, mercury and cadmium. Consumers are unaware of the environmental significance of upgrading their mobile phones, for instance, on such a frequent basis but could do much to encourage manufacturers to start to move away from the wasteful, polluting linear economy towards are sustainable circular economy. 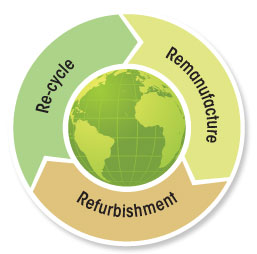 Remanufacturing is the rebuilding of a product to specifications of the original manufactured product using a combination of reused, repaired and new parts. It requires the repair or replacement of worn out or obsolete components and modules. Parts subject to degradation affecting the performance or the expected life of the whole are replaced. Remanufacturing is a form of a product recovery process that differs from other recovery processes in its completeness: a remanufactured machine should match the same customer expectation as new machines. 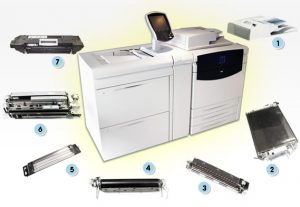 In 1995, the United States Environmental Protection Agency (EPA) implemented the Comprehensive Procurement Guideline (CPG) program to promote waste reduction and resource conservation through the use of materials recovered from solid waste, and to ensure that the materials collected in recycling programs will be used again in the manufacture of new products. The EPA is required to designate products that are or can be made with recovered materials, and to recommend practices for buying these products. Once a product is designated, state and federal procuring agencies are required to purchase it with the highest recovered material content level practicable.

In 2004, the EPA published its third CPG update (CPG IV) which designated seven additional products and revised three existing product designations. One of the new product categories to be added was Rebuilt Vehicular Parts. The EPA defines rebuilt vehicular parts as “vehicle parts that have been re-manufactured, reusing parts in their original form. Rebuilt parts undergo an extensive re-manufacturing and testing process and must meet the same industry specifications for performance as new parts.”

In the UK, a market potential of up to 5.6 billion GBP has been identified in remanufacturing, with the benefits said to be improvement to business margins, revenues and security of supply.